Knowing that I was going to Oregon in July, I prepare my trip like any tourist. With the difference that I do not seek the most beautiful beaches, waterfalls or excursions, but the best tobacco shops where I will be able to stock up with local merchandise, but also the pipers of Oregon. Not having a sufficiently developed piping culture, I search on our site to collect this information. For tobacco shops, nothing easier, there is no referenced, so after a quick search on the internet, I found in Portland, the first step of our stay, a store like we would all have in France, the Rich's here is the link :

First thing to know in Oregon, smoking is prohibited within 10 feet of a building. While the state has legalized the sale of cannabis, such a restriction may seem strange, but the United States is not at a contradiction ! 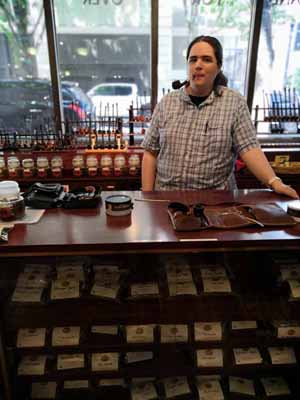 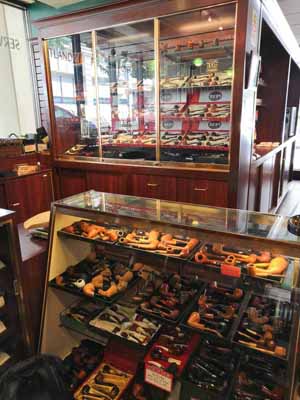 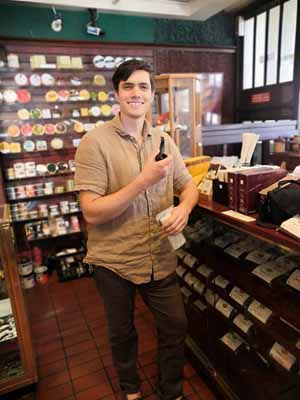 As I enter the store with my son, I am kindly told that minors are prohibited here. At first, I do not quite understand why and after entrusting it to my wife who preferred to return to the hotel, I finally returned. A smell of smoked tobacco greets me immediately. Indeed, here it is possible to smoke inside !!! I understand better the refusal to bring in my 6-year-old son. Back from my surprise, I start to take a look at the displays. Here, it's all about tobacco and nothing but tobacco. Cigars, cigarettes and pipes find their specialty. I head naturally to this last ray where I find a seller, pipe in beak, chatting with a customer, pipe in the mouth too. With a certain gluttony, I begin to detail the contents of the displays and very quickly my eye is attracted by jars filled with tobacco. I engage the conversation with the friendly salesman, my pronounced French accent tells him immediately that he has to deal with a stranger. It turns out that the owner makes his own blends that he offers in addition to most classic tobaccos, obviously very well represented also. He also tells me that with my pipe, it is possible for a small fee, to try the tobaccos. Practice can be dangerous for his pipe ! Anyway, having only left for the morning of the hotel and never smoking before my lunch, I did not take them. However, as in tea shops, we discuss my tastes and he offers me to smell homemade blends. After a dozen tests, I set my heart on 3 different tobaccos that I will detail another time. Then the conversation begins between the other customer, the seller and me about the world of the pipe in the US and France. We also talk about pipemakers. Surprisingly, while the store offers many, few pipes of great brand, many common. I finally leave the store after asking permission to take several pictures for our site. That ends the tobacco store section of my trip. Now let's talk about the Pipemakers section. 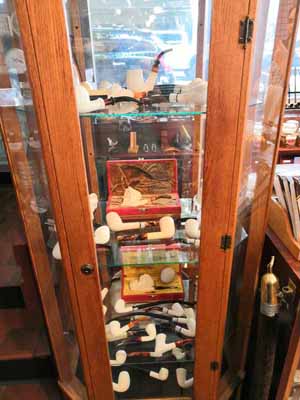 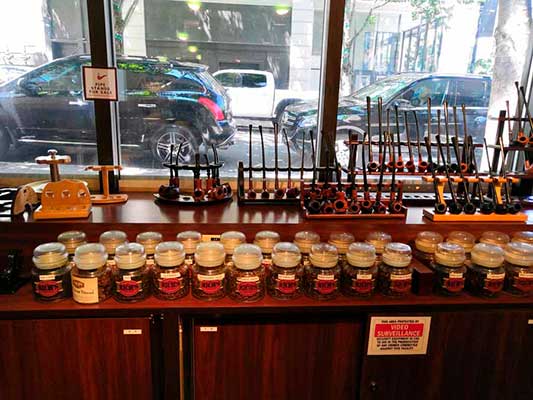 After a quick check at the American pipe section, their numbers do not make me dig deeper than that. Also I search the web, but there, apart from articles to smoke recreational grass, no result either. So I leave the side of our listing and decided to open each article. Note for later, it might be necessary to classify them by state if it is possible, it will facilitate future research! I finally find two names : Silver Gray and Orton. If the pipes of the first are really beautiful, I will not dwell on Orton who besides never answered me. I will tell you here about my meeting with Silver Gray. 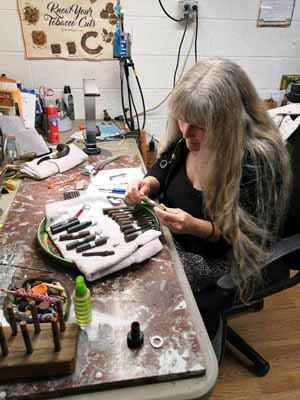 After finding his site from ours, I send him a message about a month before I leave. I did not get an answer right away, but she finally told me that she would be very happy to welcome me to her home. After several exchanges, we agree a date that corresponds to my travel steps. Spending two nights on the Grants Pass side, I find myself just 30 minutes drive from her home. I leave so wife and child, much less excited by this visit than me and preferring to spend time at the hotel pool waiting for me. So I leave in the morning, forgetting, once is not customary, my pipes. The area where she is, is beautiful. From Grants Pass, head south through Oregon's great forests. The week before, his dog even put a bear running around the house.

I arrive at her house, park and leave with a little apprehension, the Americans can have a sense of private property developed enough and the omnipresence of weapons can make this feeling dangerous if I made a mistake ! Finally, a gentleman comes out to greet me and - oh yes, I forgot to specify for those who do not know, Silver Gray is a woman - calls his wife. We all go into the house where I also meet the dog who has put the bear to flight and who only has to measure 10 inches ! Silver Gray introduces me to her husband, also a pipemaker, but it was not until later that I truly understood his identity. I let you marinate a little and continue my story.

She owns a home near Applegate OR, where she moved there shortly after her daughter left for college. She could have gone anywhere but she and her husband who came from LA wanted to stay in the area. Also, after a year of research, they managed to find one that met their expectations, not too big or too small with room to work together. One floor is reserved for housing and the basement has been converted with a room including the sanding machine and the dust collector, another room with their two workshops and finally a rest room with their impressive collection of pipes and many books devoted to their passion. Well, I will not make you wait any longer. Her companion is none other than Brad Pohlmann, whom she refers to as her mentor. Yes, you read correctly, THE Brad Pohlmann. A reminder for those who do not know him, it may be one of the best American pipers. He began his career almost 40 years ago and his work is now internationally recognized. I have to admit, I only knew who he was by doing research a posteriori, not being a connoisseur of American pipemakers.

After visiting her workshop, she explains the work she is currently doing. Peterson entrusted her with the task of working on pipes for a reissue of a pipe of 1930 it seems to me. She has about fifteen to do :

We also talked about her pride in being the first woman piper to win this year's Chicago Pipe Show, while Brad was a few years ago. She only works on orders and she has a number on hold. She has a binder in which she has all her bosses that are on rigid transparent plastic, which allows her to directly transpose the shape on her pieces of heather. Speaking of heather, she showed me her perfectly classified stocks by source and year for optimum drying. Most of it comes from Greece and Italy, but also from Algeria (less used). She uses very little morta or other exotic woods. She and Brad have made a lot of the tools they use. He is also at the origin of a clever dust extraction system in their workshop. On a board hanging on the wall are indicated the orders for the two pipers. Know it, if it is, it will be necessary to be patient ! 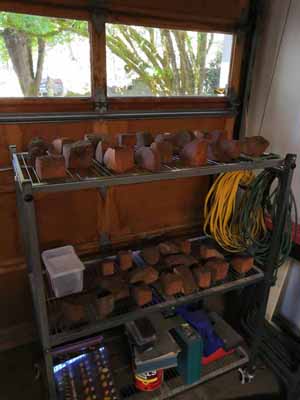 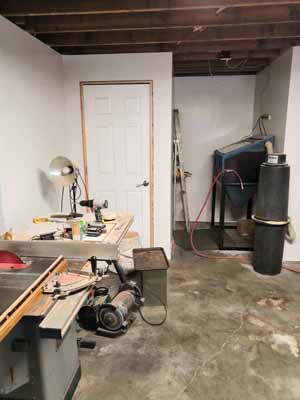 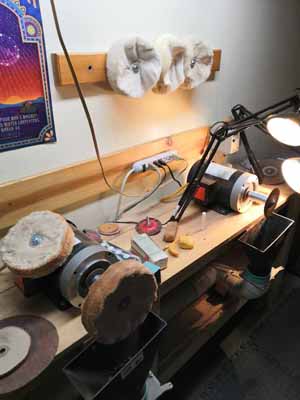 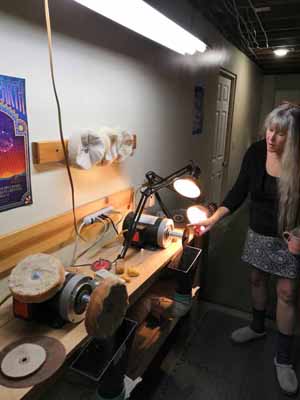 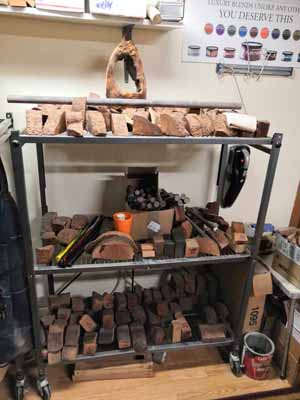 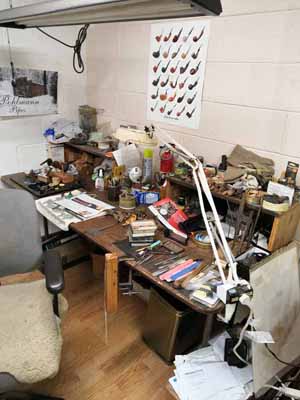 Returning to their room for rest where their collection of pipes, she shows me hers, often very fine and I can not help but think about the pipes of our pipemaker Bruno Nuttens i'm talking to him. She obviously knows his work and appreciates it very much. Bruno, wait for you maybe at a command from her ... She makes her own tobacco mixes that seems pretty sweet.

Having no pipe running as she works on Peterson's pipes, Brad shows me one of his pipes that he has just finished. It is beautifully rusticated. The colors stand out perfectly. I would have liked to leave with ! I did well to inquire about prices before ... 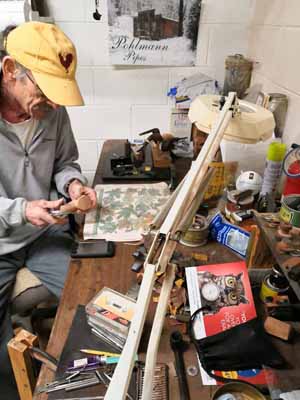 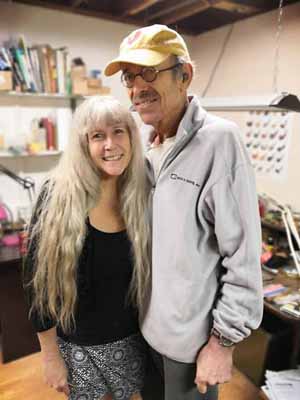 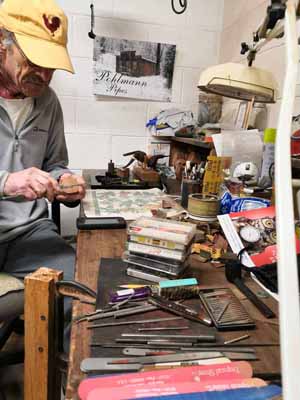 Brad is also a musician and he wants to build a studio in one of their outbuildings. Coming out, Silver shows me her second passion, her garden. There are all kinds of vegetables but also tobacco ! Several plants from Virginia and Burley are present. It is not yet for its consumption given the necessary drying, but it can be used later. The visit ends with a gift she gives me. With each pipe, she sends a tamper. She offers me one that she makes me choose. I also leave with several strands of lavender that she tied with ribbons.

After a goodbye that I hope is not a goodbye, I take my car back to my accommodation, the head full of our interview, lucky to have met these two characters in their element. I only have to save a few years to be able to someday make them my own order. On my return to the hotel and some research on the internet, I only measure the chance I had to meet Brad Pohlmann and Silver Gray. Apart from their true talent, I thank them both for the time they gave me and their kindness. I will remember for a long time.

To extend this virtual meeting that you have lived through this text, do not hesitate to take a look at their sites, and even if no pipe is available for sale, you can nevertheless see their achievements, it's worth the detour ! 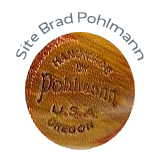 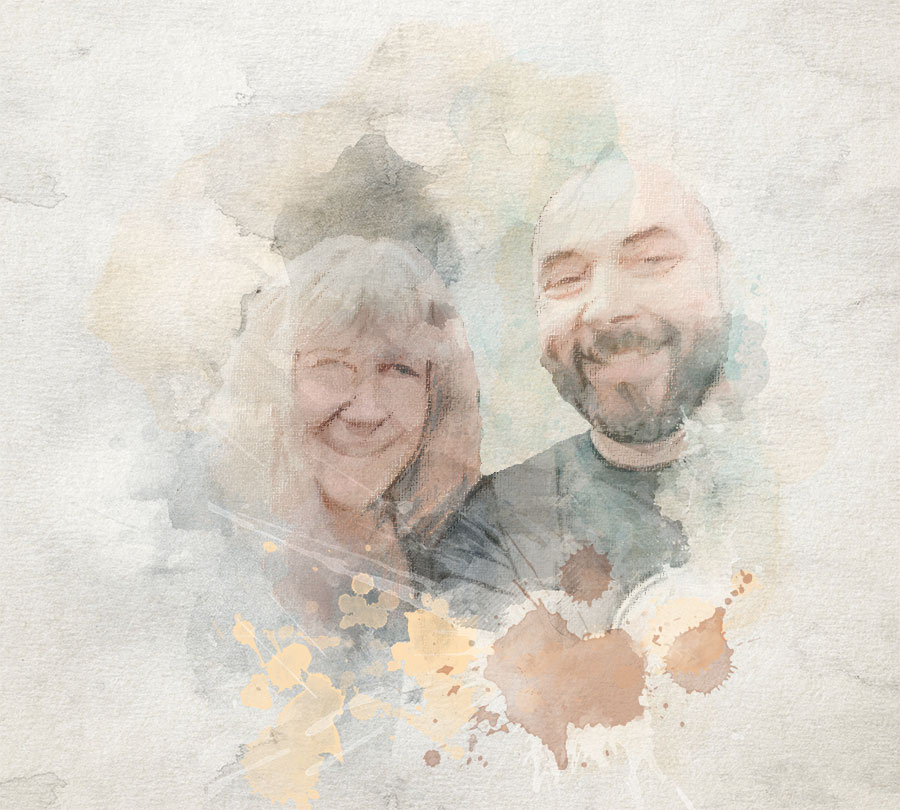